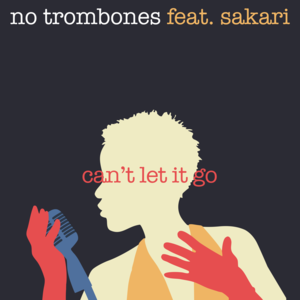 No Trombones is a recording group led by Rick Vincent, a songwriter, visual-artist and multi-instrumentalist from Montréal, Canada.

Stylistically No Trombones has its own distinct Pop sound, a mixture of past and present with elements of Funk, Jazz, R&B and Blues fused into an original flavor.

Each No Trombones recording features musicians from around the world and uses today’s new tools and platforms to connect and inspire the talents needed to weave together engaging musical stories.

MONTREAL, April 9th, 2018 -- Walk the Walk is the toe-tapping debut single from No Trombones to be released on May 4th, 2018. This song is inspired by the idea that people make a lot of promises they don’t keep. In the song’s story, a little girl is abandoned by her mom for some sweet-talking man that in the end treats the mom very badly. The song reminds us that we should Walk the Walk and not Talk the Talk.

Written by Rick Vincent, a composer-producer from Montreal and No Trombones’ leader, this new song has a retro-vintage sparkle to it. No Trombones uses borrowed influences to create a new dish which tastes familiar but that gives off fresh new aromas, and this recipe has a great horn section baked in.

Early in 2017, Rick started working with Lil Rounds, an incredibly gifted singer from Memphis. Lil has been singing since she was 3 and was an American Idol top ten finalist. American Idol judges had described her voice as a “soulful breath of fresh air”.

Walk the Walk was mixed and mastered by Yoad Nevo at his studio in London, England. Yoad is a producer/mixer known for his work with Sia, Pet Shop Boys, Bryan Adams, Sugababes, and Moby, amongst others.

“You send your tracks and ideas out to people around the world and quite often the musical contributions that come back to you make it feel like its Christmas! There is so much talent out there and collaborating using the internet can be very inspiring.” says Rick. The tracks for Walk the Walk were recorded in Montreal, Memphis, Cologne, Los Angeles, and London.

No Trombones will be launching its next single in August of this year and will continue to work with musicians around the world.